Gold nanoparticles - "Jokers of our body" 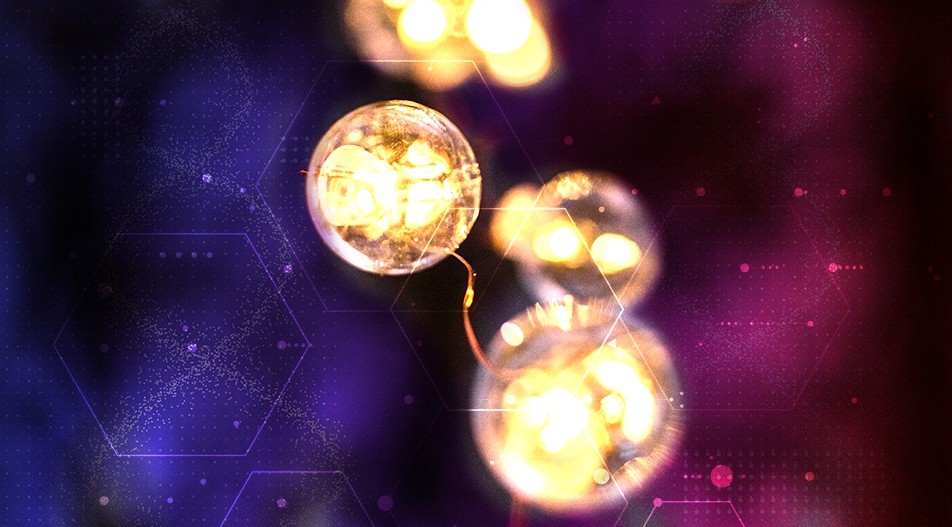 Gold is a precious metal accompanying man for thousands of years until recently it was valued because of its aesthetic values as well as chemical resistance.

The earliest reports on the use of so-called The red gold colloid comes from China - where it was used as a life-extending drug. Indians also know nanogold under the name "Swarna Bhasma" - prepared by quacks as a refreshing and regenerating medicine for the elderly(1). The Bible also reports that gold colloid is used as a remedy for stupidity(2). In the Middle Ages, gold was used as a medicine for circulation problems and as a medicine for old age ailments. The Renaissance is an "Aqua Regia" medicine for the heart and everything else. Later tinctures based on colloidal gold - obtained by alchemists were used for all kinds of diseases(3). For the first time the red gold colloid was examined by Faraday in 1857, the conclusions of this eminent scholar were confirmed today by the equipment currently available (4). As research shows, the intuitive use of nano gold in the above-mentioned cultures was most reasonable.

Gold-salt compounds, especially those used as medicines - have many side effects and the least harmful to our body are; headaches, diarrhea, allergic reactions, increased sensitivity to light. Aurothiolates - gold compounds, despite the ones mentioned above, have been and are still used today, but nowadays it is more and more often said that they are replaced by appropriate gold particles that are completely safe and so far no side effects of nanoparticle use have been found yet gold (nAu). The development of nanotechnology causes that gold, or actually nano gold, is gaining more and more application in medicine, especially in the diagnosis and treatment of many diseases, including cancer (5). In addition to the use in oncology, more and more research is devoted to research on the use of gold nanoparticles, and especially conjugates in other fields. As will be explained later, nano gold can not only be used as a medicine but also healthy people can use it to improve their quality of life. 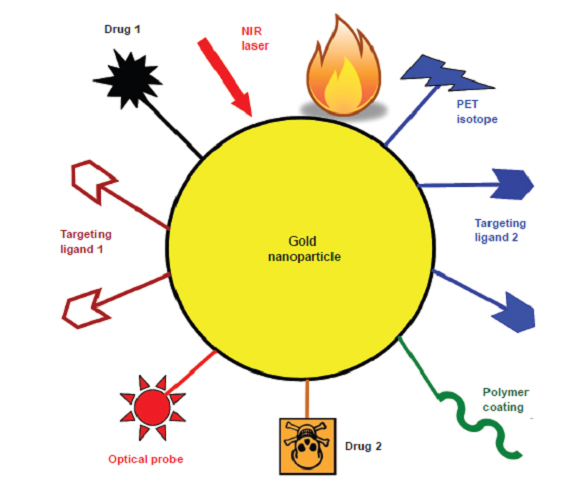 A selection of information and studies published in recent years will be presented below. Broadly understood cancer treatment will be discussed separately.

Applications of gold nanoparticles in medicine

Rheumatoid arthritis in recent years has become a serious problem and develops into one of the diseases of civilization associated with a sedentary lifestyle. Recent nano-gold (6) studies have shown that gold nanoparticles bind to endothelial vascular growth factor (VEGF), inhibiting its action. According to studies on rheumatoid arthritis, VEGF inhibition significantly inhibits its development (7). Two-year initial clinical studies in dogs confirmed the strong analgesic effect of nAu in arthritis (8). 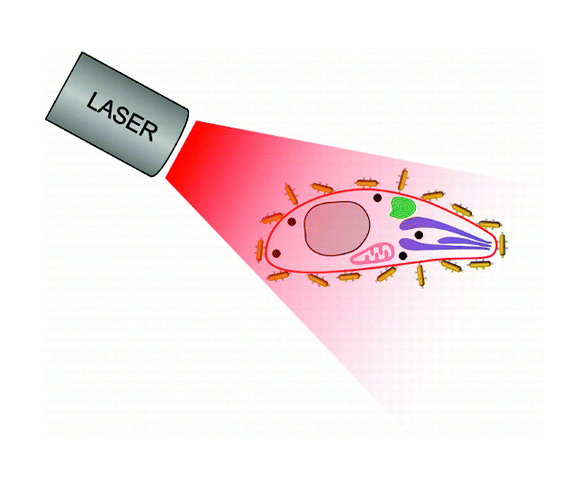 An extremely interesting and important application of gold nanoparticles is the possibility of attaching various types of particles under nAu. The very process of covalent Au binding of organic molecules is relatively simple and easy to carry out due to the high affinity of gold for thiol and amino groups. Thanks to this hook up under the nanoparticle, drugs that could not reach the diseased tissue can be smuggled to their destination on the surface of the nAu. You can also increase specificity - i.e. aim the drug to a specific place in the body and attach an antibody or other vector factor to the gold nanoparticle that will ensure delivery of the drug to the desired place (11).

An interesting and important example of the use of nAu in drug delivery systems is HIV treatment. Many drugs have been tested in the fight against HIV, unfortunately many of them due to high toxicity or transport problems in the body (hydrophobicity, degradation in the body) caused that these drugs were rejected at the testing stage. An interesting case is TAK-779, which due to the high toxicity caused by the aluminum molecule, which is necessary for proper operation - however, it turned out that replacing the aluminum salt with a gold nanoparticle gave equally promising results (12). Research on this drug has caused that many of the previously abandoned drugs are currently being tried to be combined with gold nanoparticles to test for potential retro viral effects.

As the Optimom Corp research showed. gold nanoparticles can improve cognitive function. In this study, research group (15-45 years) was given nano gold in the amount of 30mg gold / day for 1 month before the start of the tests and during their duration 1-3 months. A group of WASI-R intelligence tests were used as a test for possible changes. Reference study carried out before starting to use gold colloid, the first check was after 30 days of taking the drug - showing a 20% increase in cognitive ability (13).

Studies carried out on healthy units, as a control sample for clinical trials, in addition to reference data for pro-drug tests, presented several applications of supplementary gold to the above-mentioned. Accordingly, tests were carried out to collect and systematize data on the action of the red colloidal nano gold. The results turned out to be quite surprising both in the case of continuous administration of gold nanoparticles, as well as its occasional intake (15mg gold dose / day), in addition to general improvement in well-being found:

The above changes were observed in both groups, while much larger changes occurred in the group receiving regular gold nanoparticles (14).

The studies were also conducted on elderly people (75 ± 9 years old). As it turns out, the results were in which general well-being, fatigue, short-term memory, motor coordination were monitored - general symptoms of senile dementia. Subjects were given 20mg gold / day. Health checks were carried out after 1 month and every month after cessation of colloid administration. The overall improvement in the state of health, depending on the examined indicator, ranged from 15-35% (according to the applied point scale assigned to the individual examined feature). Improvement of health was visible even after 3 months after stopping the administration of the gold colloid (14).

As is known Parkinson's, Alzheimer's Huntington's disease and prion diseases are associated with the accumulation of proteins in the central nervous system, thus impairing its functions. The first study was conducted to detect Alzheimer's markers (15), the results were very promising. However, two years later, the first reports appeared about the possibility of removing protein deposits using gold nanoparticles and weak microwaves (16).

Also, the use of gold nanoparticles with a polymer coating with polyelectrolyte (17) properties allows you to combat age-related diseases associated with the nervous system.

Another problem very common in today's world are all kinds of addictions ranging from smoking through alcoholism, workaholism, shopaholism etc. and ending with drugs. It turns out that gold can be helpful here as well. Research conducted on gene silencing responsible for the expression of DARRP-32, ERK and PP-1 proteins, responsible for the signaling cascade in drug addiction (DARRP-32 is suspected also in other addiction involved in the transmission of neural signals). Gene silencing was carried out using the nanocomplex - nAu-DARRP-32 siRNA. The results turned out to be surprisingly good, more than 40% of siRNA went to cells in the brain, significantly more than before using traditional methods (18).

According to studies on homeopathic medicine (19), nAu is used as a remedy for depression and suicidal tendencies. It is also used to treat libido related disorders as welldiseases caused by too little sunlight (vitamin D deficiency) such as anemia, vision problems, headaches, insomnia.

A wide front is research on the use of gold nanoparticles (both nanoparticles themselves and their conjugates) in the diagnosis and treatment of cancer (5).

Diagnosis of cancer cells focuses primarily on conjugated nanogold with various types of specific factors for cancer cells (antibodies are particularly important here). An important advantage of gold is that, unlike fluorescent markers or dyes, it does not break down during prolonged exposure (20). These types of nanoclusters may in the future be a complementary method for PCR, especially in identifying genetic material of bacteria and viruses (20). Diagnosis of cancer cells using conjugated gold nanoparticles may soon find many buyers due to significantly lower costs, unlike the traditionally used and most common flow cytometry (5).(21) (Markers)

The next step after diagnosis is the destruction of cancer cells. In general, the methodology for treating cancer with nAu is derived from methods of detecting these cells, but currently there are two ways to achieve the goal - to destroy the cancer. One way is to attach an antibody-drug to a gold particle, which will be released in the cell and will attack only in the diseased place without damaging healthy cells (5). Due to the properties of gold nanoparticles, research on the above-mentioned method has been abandoned and the interest of scientists has been shifted to the direct use of nAu to detect and destroy cancer cells (5),(22). Recent results, particularly regarding the use of nanoparticle conjugates - an antibody to tumors that cannot be easily reached with electromagnetic radiation, show that this method of gold should not be completely forgotten. The method focuses on delivering the nanoparticle to the diseased cell and inducing apoptosis in it by blocking division (23). An important property of gold nanoparticles is the absorption of electromagnetic radiation (light, laser light, infrared radiation) with a simultaneous rapid increase in temperature resulting in destruction of the structure of nearby cells (24). A special and interesting case is hollow nanogold gold nanoparticles, which show much better properties than traditional nanoparticles and we get an energy charge that lasts a long time. They also show much stronger absorption of near infrared radiation, which makes them much more effective (25). It has been proven that nanosilver certainly inhibits tumor angiogenesis.

As can be seen from the above examples, gold has many applications, from very specialized applications such as cancer treatment or drug delivery systems to very prosaic and usable by everyone at home to improve the quality of their lives.

In terms of ensuring a "better and longer life", it seems very important to improve mental abilities, especially cognitive abilities. In other words, regardless of age, we can learn more and solve problems that require logical thinking faster and unconventional methods.

Among the presented scientific studies from recent years, there are suggestions on the possible improvement of transport in the body of many supplements containing in their composition amino, thiol groups or both, if administered together with gold. The desired compounds should reach the target cells faster as well as in greater concentration from the digestive system into the blood if they are complexed with nano gold.

Given the examples of scientific research cited, it is necessary to admit that the ancient Chinese, Hindus, Israelites and probably other nations of antiquity have shown that the gold they used really helped. Also the Renaissance "Aqua Regia", in the description of the ailment to which it was used, turns out to be the most true medicine.

As it turns out, apart from micro and macro elements, it will perform very important functionsand the third group of elements important for the life of all living organisms. They are found in micro grams per kilogram body weight, known as ultra elements. At present, all their functions that they perform in the body are not yet known, however, they suspect that they mainly fulfill regulatory functions. The most widely known function of ultraelements is the activation of biochemical processes, they play a special role as enzyme activators. The ultra-elements include gold, silver, platinum and radium, but the list is certainly not closed. At present, the first three with a particular focus on gold and silver are considered the most important.

Finally, mention should be made of the increasingly studied gold nanoparticles in combination with silver nanoparticles. Where the research proves more effective and better therapy than the action of nano gold or nano silver alone (5).

Creator of nanoparticle therapy
Member of the Consultative Council of the Gdansk University of Technology
Member - founder of the Polish Chamber of Advanced Technologies
Co-author of several patents in the field of nanotechnology.